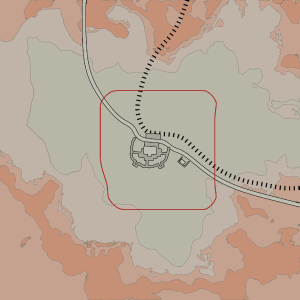 NOTICE: This map has been removed

Depot Encounter is a map added in Y build. Depot encounter is the starting map for Tier 0 players (rank 0-3), but can also be accessed by Tier 2 players. It is designed to help you learn the basics without tanks and planes, via the use of a new gamemode called Encounter - in which said ATs are unavailable (along with recon and paratroopers).

The entire map is based in a forest clearing with a railway track running through it, however most of the fighting will occur around the Depot building, a large warehouse in the center of the area. The Depot itself is surrounded by trenches and small covered areas, making for a great deal of close-quarters combat. There is also an underground bunker that is accessible from the outside of Capture Point 01. Nearby is a small railway platform, which is like the inside of the Depot: covered in obstacles, which can be easily used as cover for taking out enemies from a slightly further distance.

The two main Spawnpoints are at either end of the forest clearing just inside the treeline, and feature the new 'Anti-Spawn-Camping' system added in the Y build. One is based around a small house which has direct access to the road, whereas the other features a miniature bunker complex, closer to the map's train station area.

The Depot (01) is surrounded by trenches. The main building is full of crates and obstacles for maximum cover, and features 2 floors (the second being a metal walkway, which runs around the inside walls of the warehouse). There are many supply crates in the trenches surrounding the capture point, including health, ammunition, and panzerfausts. The capture zone for the depot includes the entire interior of the main building.