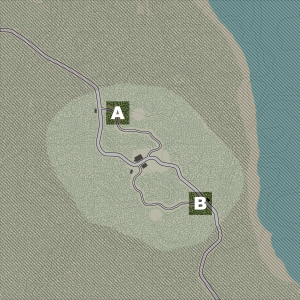 [[File:spawn.png|400px|thumb|Spawn: Check the map for Panzerfaust 60 location. Forest Skirmish has the basic linear layout where each side spawns near one of the points with a central point between them. In the center of the map there is a group of two barns that provide significant cover from tanks. At the spawn players can pick up a Panzerfaust 60 and/or a bolt-action rifle (the M1903 or the Karabiner 98 Kurz). There are also a few bicycles near the spawn for players to use as means for transport.

Point A provides little cover for the team who spawns farther away. The enemy comes up over a small hill with a few rocks for cover and has the height advantage. There are two places near the point the player can sit behind, a rock and a pile of wood, that provides cover coming from the closer team's spawn. There are a few bicycles and the point that players can use for moving around the map. There are also a few bushes that players can hide behind; especially allied players as their uniforms are green.
Highlights

Point B provides lots of cover for infantry units. The buildings make it difficult for tanks to get in close as it leaves them vulnerable to anti-tank grenades and rockets. There are two barns on the point that players can hide on the bottom floor and top floor that has windows on the second floor to shoot from. There is a small rubble building off to the side of the point that is outside the range of capping that provides decent line of sight over the entire point. There are two health boxes on either side of the point that players can get ammo and health from, check your map when near point B to find the location of theses boxes. Recon and [[Tank |tanks]] commonly camp on the hill above point B near Point A, so be mindful of this location. Inside the smaller barn, there are attics where you can throw grenades down onto anyone who enters, but you have to be careful, as anyone on the other side of the barn can climb to the second floor and shoot you while you are distracted.
Highlights

Point C provides good cover for infantry units. There are two fallen trees near the point that players can hide in while capping the points. This location is full of tank traps and sandbags so it makes it difficult for tanks to get close to the point and makes them vulnerable to anti-tank equipment. The only downside to point C is that there is some line of sight to Point B so it can make it hard for infantry to run from point C to B. There are also a few bicycles at this point that infantry units can use to transport around the map.