Welcome to the Heroes & Generals (H&G) getting started guide!

Heroes & Generals consists of two major parts. One part is the Heroes, a multiplayer first person shooter. The other part, Generals, is a massive multiplayer real-time strategy game. This can be a lot to absorb, so this page exists to assist in the learning curve.

↵☃☃↵↵☃☃↵ Once you are sure your machine meets the necessary hardware/driver requirements, you need to register an account. Registering will give you the username and password needed to log into the game. You can register by visiting this page.

↵☃☃↵☃☃☃☃↵☃☃↵↵☃☃↵☃☃↵↵☃☃↵↵☃☃↵ If you are logging in for the first time or if the war has recently ended, you will need to choose a war. At present, there is only one war. But when there are more players online, more wars will be available to join.

Once you logged in the game and chose your first soldier, you will see the main interface or "Heroes" tab which includes numerous options. 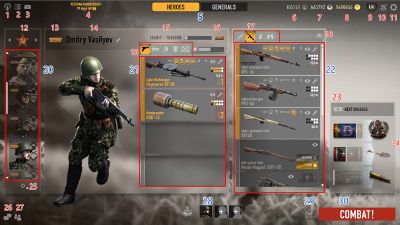 Let us go through all the numbers and buttons.

Time to Squad Up and Go to Battle![edit | edit source]

Looking to join a battle? Click on the COMBAT! button in the bottom right corner to open the Map & Filter selection.

A squad is the core of team work and can be customized before (but not during) a battle to fit your needs.

Setting up auxiliary seats allows you to be more versatile while in-game. You can spawn a soldier of a different type than the squad type.

In war, unlike in staged battles, you have the ability to queue up for specific battles.
In order to do so, you have to open the war map, look at the ongoing battles (burning cities or burning points in between cities) and discuss with your squad which one you would like to join.
There are several criteria that have to be fulfilled to be able to join as well as a way to increase your chance of getting in. More information on that: Joining Specific War Battles

As mentioned at the beginning of Time to Squad Up and Go to Battle, you gradually unlock more game modes as you level up your Player Level.

There are two categories of game modes: Staged Battles and War Battles. Both categories feature all game modes and all maps.

War battles are set up by players.
Though not everyone can set up war battles, all players with a player level of 10 or higher can join war battles.

Apart from letting the match-maker find you a battle, you are able to choose your own battles on the war map.
In order to do so you first have to choose a faction for which you want to fight for the duration of the current war.
There are several conditions that have to be fulfilled to be able to queue for a specific battle:

How to fight[edit | edit source]

You shoot the enemy. You capture the objective. You coordinate with your teammates. Also, don't forget to whistle.

Here are some of the more useful controls. You might want to use these in your first battle.

You can spawn near any point your team has captured.

If you like to spawn previously selected auxiliary seats and the desired ressource is available, you can select the auxillary seat soldier through your soldier list.

There are different ways to play this game as infantry. As we know, infantry is the main core of an army and without it it's impossible to win whether you attack or defend.
Condition - Capture: You can help your team by pushing with them or defending the last conquered point. Both actions are equally important because you can't capture the next point if you lose the previous one!
If your teammates are moving forward and you stay behind camping, trying to find someone to kill, "You are not helping your team", "You are not going to get much experience, credits or points to unlock ribbons". Sometimes killing enemy soldiers is a little useful towards victory as it drains the enemy spawn tickets/lives (lives from the assault team). You do not get a lot of experience for killing soldiers (outside of a capture zone) but it does help you leveling up your gun and unlocking new guns.

Situation and Instruction: You spawn at C1 with your teammates and you have C2, C3 and C4 ahead. One guy to capture C2, the others move straight to C3. Half will guard it and the other half will fight their way to C4. This can be changed by planes and tanks, maybe easy or maybe harder.
It's hard to see good team play. If you spot good players or squads, try to work with them.

How to deal with Tanks[edit | edit source]

What do tanks do?

Tanks provides very safe protection to crews from gun fire. They often have very powerful cannons, which can be loaded with high-explosive shells, along with machine guns too. They can suppress infantry from distance, defend bridges, access points and eliminate vehicles but also combat enemy armors. However, a tanker's view is extremely limited due to the crew only being able to observe the surrounding environment through its scope and view port. So it is extremely easy to get flanked up close by infantry. That is why it is often advised to cover your teammate's tanks, to avoid enemies from using anti-tank equipment to destroy them.

How do I destroy a tank?

You need anti-tank weaponry to destroy weapons. There are hand held anti-tank rocket launchers (Panzerfaust 60) scattered across all maps. There are also rocket launchers, anti-tank mines and anti-tank grenades which you can unlock and purchase to use on your soldiers. The hand greanades do NOT deal any damage to tanks and armored vehicles, including Armored Personel Carriers (APC). So if there's an enemy tank in sight and you don't have any anti-tank weaponry at the time, do not waste your time and credits throwing hand grenades at them. Just simply mark its location by aiming at it for few seconds and let your other teamates know and deal with him or try to find anti-tank crates on the map (note: it takes around 3 shots from picked up anti-tank rocket launcher (Panzerfaust 60) to destroy a tank).

Anti-tank mines are best being used for defensive purpose. It only takes one single mine to kill any type of vehicle (from Cars to Heavy Tanks), as long as they drive right over it. Note: if an Anti-tank mine explodes next to a vehicle instead of below, it only deals about a third of its damage.

How to deal with Anti-tank Mines[edit | edit source]

How to deal with Planes[edit | edit source]

Why am I blown to smithereens by planes all the time?

Planes often have the altitude advantage, so they tend to have a great overview of the battlefield. They can easily pick out the targets to destroy. However, they do have their own limitation too - weather, trees, houses and also very loud engine noises. So, it is not difficult guess a plane's action.

Use Anti-Air Guns on map to counter planes. You may not be able to take down planes all the time but by using AA guns (which can be found near most of the main objectives and some capture points) you can put more pressures on enemy pilots, force them to change there tactics and also make them be more cautious about their strikes. Forcing them to repair can be better than destroying an aircraft as it takes more time before they can get back up in the air.

The game has a variety of classes, which you can see in the picture below. This section covers the main roles of each class and some player-made variations that are common.