In the game you can buy various gear but you are limited to your soldiers eqiupment limit. 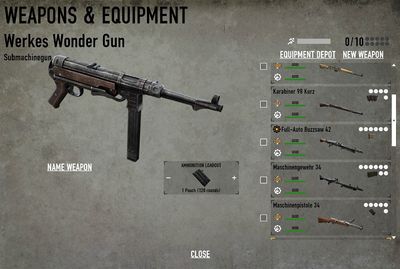 An example of most weapons a German Infantry man can use

An infantry man has 10 "Equipment points" meaning they carry the most of all classes. They also have access to almost every gun for their faction.

A tanker has 6 "equipment slots", meaning you have to choose if you want an SMG or to carry a vital wrench and other gear.

A Paratrooper has 6 "equipment points", you can either use an SMG or a FG42 Ausf. E/Johnson M1941 LMG for six points. A rifle weights 1 point less so you can bring one of the Close Combat Weapons. The third alternative is bringing Handguns and Explosives to the battle. The Free fall is considered the best badge for paratroopers by letting you deploy your parachute near the ground making you a hard to hit target while you are dropping down to the ground.

Fighter pilots have 6 Equipment points so they can either carry a SMG or an Adjustable Wrench for personal defence or repairing the plane with wrench.