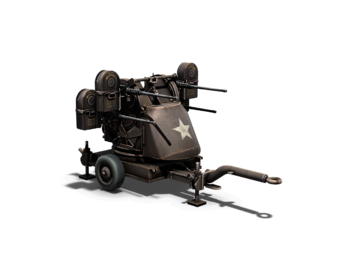 The M55 Quad is the Americans' anti-aircraft gun, which fires its rounds sequentially. The M55 Quad is generally found at main objectives and access points if they are held by the Americans. When German forces control the area a Flakvierling 38 replaces it, and a Maxim M4 Quad if the area is hold by the Soviets.

An anti-aircraft gun will spawn with full ammo and full health after a short period of time after it is destroyed by any source of damage. Most turrets can be found in pillbox positions protected against snipers (Provided that they're not in an elevated position) and most armor fire. The anti-aircraft gun will automatically refill itself when it runs out of ammunition.