Generals and Officers have to take morale of their troops into consideration when they manage the war resources and execute their strategies. Assault Teams will start to deplete and lose morale points every time they enter a battle. Although they do gain some back by winning battles, they will not gain more than they lost. This means that like in real war, Assault Teams can not keep attacking endlessly but have to stop and rest every once in a while even if they win every battle.


Based on feedback from community, changes have been made to help make it more profitable and faster for generals to play battles. By reducing long queue times it results in longer wars, and allows individuals to return their near depleted units to the faction stockpile, should they choose to do so. When stockpiles are sufficient, players may opt to pay redeployment cost for fresh units and still be able to continue to fight for friends on the war map.


The Vasilevsky update also brings new combat badges and ribbons especially for generals and officers which when equipped can give a boost to: movement speed, maximum morale, or morale replenishment speed of their Assault Teams.


From this point forwards, Assault Teams will be referred to as AT. Here are some key mechanics and changes as a result of the Vasilevsky update.

WITHDRAWING (WHEN AN Assault Teams IS UNEQUIPPED FROM THE COMMANDER, NOT WHEN RETREATING FROM BATTLE) This occurs when: upgrading, or changing-out command badges (the Assault Teams must be unequipped in order to do so), and when withdrawing to changing classes of Assault Team to a higher or lower tier.

Similarly, if a unit’s morale is depleted, all deployed resources will be lost.


WAR BATTLES WITH INSUFFICIENT PLAYERS FOR THE BATTLE TO BE FUN

As previously mentioned, there are two badges that Generals and Officers can equip that offer boosts to Morale in different ways.

The following below may consist of out-dated information.

Be very aware of being encircled, encircled Assault Teams are no longer undeployed with remaining resources, if they cannot retreat they now lose all resources meaning a potentially MASSIVE loss of Warfunds to the player.

^Total Morale can be increased beyond 100+/100+ using Battlefield Commander badge.

^^Not taking into account the Charismatic Leader badge which increases Morale regain up to 15%.

9 Hours and ~26,5 Minutes if you have Charismatic Leader gold (roughly, this reduces a morale-point restoration by one-minute per point, I.E to 5-minutes and 40-seconds or 340-seconds);

and 12 Hours and 46 Minutes if you run Battlefield Commander gold, which requires your morale to reach 115 before you can deploy. 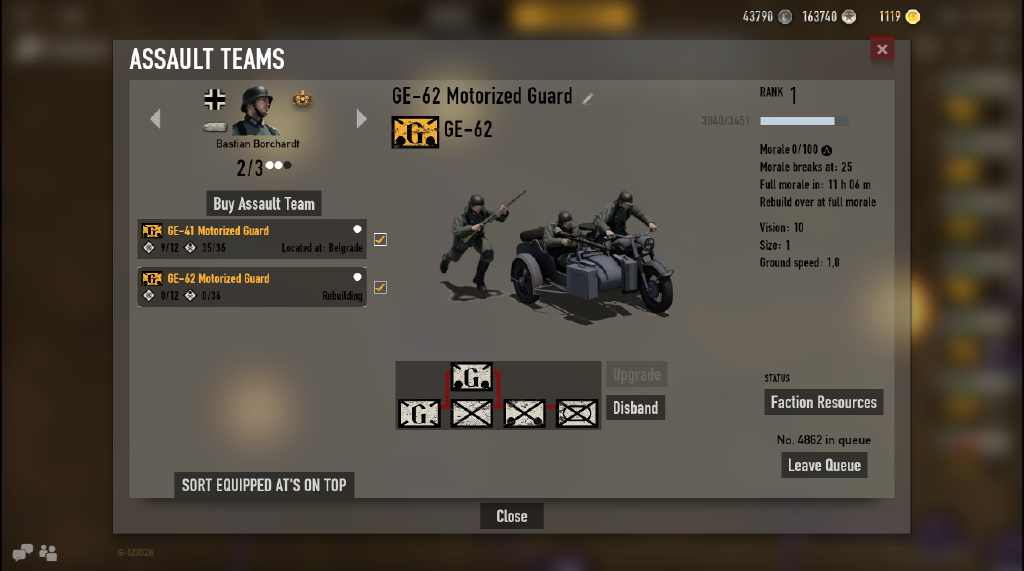