The Panzerwurfmine Lang is a throwable anti-tank grenade that, instead of getting stuck on the tank and then blowing up like the No.74, explodes on impact like the RPG-43. It is advisable to keep a distance from your objective, as getting caught in the explosion area can hurt or even kill you. It is highly effective to reduce armor and destroy the engine, as the armor on top of tanks is very weak. Use this in combination with other anti-tank weapons to be effective.

The main difference between the Panzerwurfmine Lang and the Hafthohlladung (H3) is that you need to throw it. The H3 is a magnetic charge and doesn't remove much armor. If you are going for internals and know where they are, go for the H3. If you want to wear down armor and an occasional transmission/engine kill, go for the Panzerwurfmine.

The Panzerwurfmine Lang (PWM) is a shaped charge, hand-thrown anti-tank grenade with stabilizing fins. For it to work effectively, the charge must detonate perpendicular (square against or 90°) to the armor. The hollow charge does a lot of damage and blows a hole in the armor, sending metal fragments everywhere inside the tank. Ideally, it could penetrate up to 100 mm of armor, but because of the specific trajectory and angle it has to hit, it most likely does less.

The charge is a shrunken down Panzerfaust charged, with a sort of fuse at the back. Before a soldier would throw this weapon, they'd pull out a pin and the charge is primed and the fins ready to. When thrown, the fins would expand and stabilize the trajectory. Effective range differs from soldier to soldier, but is usually around 20 meters. 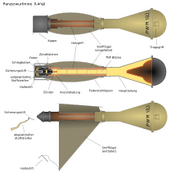