Note that, as any equipment, tanks will need to be repaired and ammo refilled between two missions. Expensive tanks are expensive to maintain, and it may not be a good idea to waste ammo or suicide your tank many times in a battle.

When you get in a tank manned by multiple crew options, you can use C to switch between seats: driver (main seat)/MG (secondary seat). Note that most light tanks only have 1 seat. 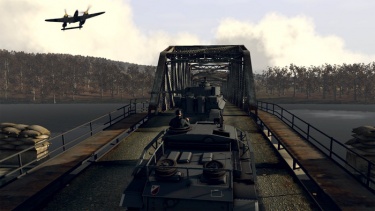 Driver position:
When you are in driver position you can use the mouse wheel (or page up/page down) to switch between:

MG position:
Some tanks have a secondary seat with a MG (Machine Gun). Depending on vehicles, it can be inside or outside, thus offering different level of protection to the second crewman. It is also worth noting that one can unlock the secondary seat for non-tank personnel by pushing the 4 key by default. They will usually control the support weapon and will have a 3rd person view of the tank and a limited cone of fire directly in front of the tank, so keep this in mind when setting yourself up.

note: now the standard configuration puts it on team, pressing 4 will actually lock the gun instead now.

Inside a tank (1st person view), you can use the main weapons, and switch between the following:

Modifying tanks is extremely important for keeping an edge over the enemy on the battlefield.
See details on Vehicles customization.

The tank is not a god-mode. It is an easy target for planes, and it will attract hatred from other tanks, and anti-tank infantry. Basic strategies thus are:

What should I do with my Machine Gun tank?

The base tank is often disliked by players, but it is often misunderstood while quite useful. It is an anti-infantry tank and should be used like that. Its MGs are extremely precise (while coaxial MGs of bigger tanks usually are not). The tank is also very efficient against non-armored vehicles. Of course, it can only destroy very light tanks, from sides or back, and its armored is really thin. Therefore, stay away from other tanks, and support infantry, more than ever (this includes buying supply crates).

What should I buy after my MG tank?

See below the list of tanks available, and which ones are unlocked by your Armor Assault ribbon. See the details of the tanks, and before making your choice:

The Armor Assault ribbon is the way to unlock new armors. There are two additional ribbons regarding tanking, which unlock badges and equipment useful for the role.