This page is a Work in Progress.

Comment: Still work-in-progress so this page will be unreliable because I do a lot of changes

A skirmish mission is started whenever Assault Teams of opposite factions meet. This might happen when they are traveling on a supply line in opposite directions (fig.1)

The Skirmish battle is fought between the Assault Teams until one faction runs out of resources, or holds the outpost long enough (until their bar at the top fills up). 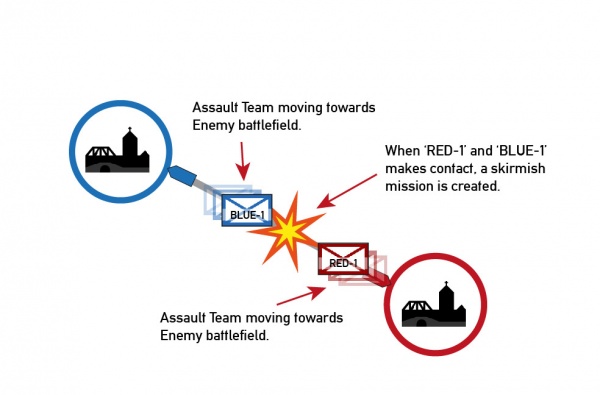 In a Skirmish match, there are three capture points, A, B, and C. One point is located near one of the Armies spawn point, and one is located nearer the other spawn point. The third point, B, is between the two spawn points - this is the main contested point. A team wins by controlling the points until their bar fills up at the top - i.e. control them for a certain amount of time, whilst stopping your enemy from controlling them. The amount of time you need to win depends on how many capture points control - e.g. if you control all three, the time will be far shorter than if you only control two and the enemy control one.The difference between skirmish and Assault is mainly the fact that you can capture any point on the maps always.

When you first enter Heroes and Generals, after creating an account and choosing a server, you will be instructed to enter a match. This match will be an Encounter (Staged) match, with others who have just entered. Eventually, once you character levels up to Rank 3, you will be able to play Skirmish maps also with everyone else, but until then you will be playing Encounters. Also, when you are Rank 5, you will still be able to play Skirmish maps that are Campaign and staged matches.

Currently there are three Skirmish Maps in the game: