The Strategic Game is an ongoing war, run on the war server and played on the campaign map. It's played within the browser, and it's not to be confused with the Action Game.

The war is won when one side reaches one of several victory conditions.

When the war starts each side starts with two Major cities:

Each player can decide which city to spawn their Assault Teams at. All other major cities and towns are neutral and up for grabs.

The period between when the war begins and first contact with the enemy is called the opening game. This is of high strategic importance as it is in this time that each team moves its forces into attacking (or defensive) positions, grabbing as much territory as possible in the process. There are now multiple capital cities in the game that are also up for grabs and as your team takes over theses territories you can spawn your assault teams at these locations.

The main period of the war is the mid-game, where the armies fight over cities and capitals and try to accomplish one of the conditions that wins the war. To win the war, currently one team must capture 15 capital cities.

The end game is the last (and hopefully quick) period of the game where one side clearly has the upper hand and is almost sure to win.

What the heck is the campaign map?

When you join a war, you aren't just fighting pointless battles. You are actually fighting for ground control. The end goal objective of each war is to push to the capital cities and take them! Each red/blue (large and small) dot represent a potential battle location. The small dots around a city are called access points. The lines connecting them are supply lines. Battles for access points are Skirmishes. If you click on a city, you will notice the access points are labeled with letters A-E. Each small dot outside the large city dot represents one of these access points. In order to attack a city, you must first control the access point at the end of that supply line. If you send an assault team down a supply line and the enemy has no assault teams at the corresponding access point, no skirmish battle will be required; the fight for the town will immediately start.

What the heck are assault teams? 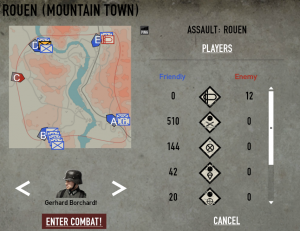 Every game you play has assault teams. As long as you aren't playing a training mission, these assault teams are all put there by players (generals). Assault teams determine what can be used in the battle. Have a pilot, but can't figure out why you cant fly him? It's probably because the game you are in does not have a plane assault team. Ever have a lopsided game where the enemy has a ton of stuff, well this is because the enemy has one or more supply lines into the town and/or has provided many more types of assault teams to aid their players. Take this image for example, the defending team has 12 available heavy tanks only to spawn in while the attacking team has a ton of infantry and other available assault teams. This is going to be one hard battle to for the enemy team to win and more then likely will result in a loss for the defending team. Clicking on a town and clicking on the resources lets you see what all the enemy or friendly team has available at that town.

How do I buy assault teams?

Assault teams are not cheap. They use their own currency called Warfunds. You earn warfunds first by playing the heroes portion of the game (FPS). Performing certain actions within the game such as capturing, defending, killing armor will yield warfunds. You will first have to earn warfunds in game before you can buy your first assault team (unless you buy them with gold). After reaching rank 12 on your soldier you can buy your first Assault team with the command point you just earned. Now you can start earning more significant warfunds by using and winning with your assault teams.

What types of assault teams are there?

There are 5 basic categories of assault teams to start with: Guard, Recon, Pathfinders, Light Armor, and Fighter Recon.

Each type has it's own pathway for leveling. The most important thing to keep in mind about assault teams, is that infantry are the backbone to fighting, therefore they make the most warfunds over time and cost the least to replace.

How do I level up my assault team?

What kind of assault team should I buy?

In order to gain enough Warfunds, it is highly recommended that you start off with Guard assault teams first. Once these are upgraded to motorized (motorbikes), they move rather quickly across the campaign map. They also cost very little to resupply and redeploy. You will need to use your infantry assault teams to gain enough warfunds to resupply your planes and tanks assault teams as those are drastically more expensive to replace.