This page is a Work in Progress. 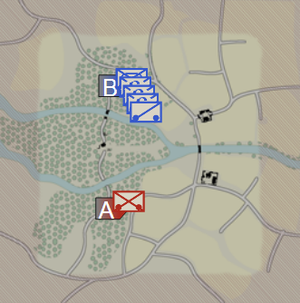 [[File:HS_spawn.png|400px|thumb|Spawn: Check the map for Panzerfaust 60 location. Village Skirmish has a new layout where spawn camping is made more difficult. There are two types of areas, a very open area good for tanks and snipers. The other area is heavily covered with foliage and makes it difficult for tanks to defend the points. There are also a few bicycles near the spawn for players to use as means for transport. One Anti-Aircraft gun is located near C objective.

Point B is very open with a few buildings for cover. The buildings make it difficult for tanks to get in close as it leaves them vulnerable to anti-tank grenades and rockets. Recon and tanks will have an easy time picking off targets on this point as their are open fields, but watch out for the ditch/river that runs through the middle and the small bridge that creates a bottle neck for tanks. There are a few buildings that can be used for cover.
Highlights