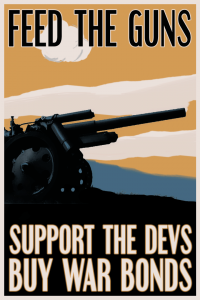 War Bonds are issued by Reto-Moto as a way for fans and serious players to help finance the development of the game, and at the same time get something useful in return for their contribution. Within the game, War Bonds work in the same way as the historical war bonds issued by governments during times of conflict. When the great nations clashed they all needed the basic resource of war money.

Germany never issued any war bonds publically in World War 2. In 1914, at the start of WW1, Germany had tried to float a major loan on Wall Street and it failed miserably, resulting in the government issuing various bonds such as the public war bond (Kriegsanleihe) to finance the war effort. While this raised some 100 billion Marks, it only covered two-thirds of the cost of the war, and the interest payable as well as the post-war reparations imposed on Germany (some 132 billion Marks, equivalent to US $442 billion today), essentially crippled the German government in years leading up to World War 2 - in fact the German government did not finish fully repaying its World War I debts until 2010.

To avoid risking another failure (highly likely given Germany's foreign policy of the 1930's) that could bring uncertainty to the public regarding the strength of the country, Germany instead borrowed directly from domestic banks. Using short-term war bonds as collateral, this resulted in the funds sitting within some 40 million bank and investment accounts being quietly transferred to the Reich, essentially a continuous supply of money. 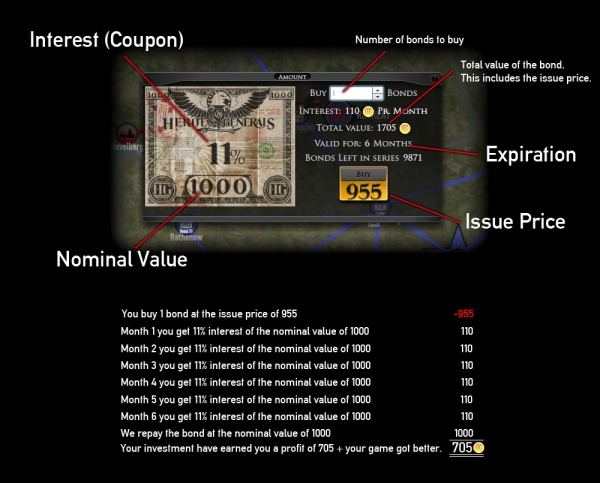 The word Bond is taken from the early English word band, which means a fastening. The word bond implies that one is "bound" to repay an obligation.[1]

A Bond is a financial 'instrument'. It is basically a loan, where the the bond issuer (in this case, the game developer, Reto-Moto) borrows money from the bond holder (in this case, the player). The actual bond is an object recognised by both parties and by the relevant governing laws, which proves that the bond issuer owes money to the bond holder. In the real world a bond is often treated as form of currency, and this object, whether a physical piece of paper or an electronic record in a database, can be traded on the stock-exchange or cashed in at an institution such as a bank which recognises it. The key difference between a simple loan and a bond, is that the bond will generally be for a fixed term (with no early repayments or extensions), the interest rate on the bond is set by the issuer, and often is not paid until at the end of the term, not progressively as in a normal loan.

A War Bond is a special kind of bond, that is issued by governments with the purpose of financing a war. They are usually somewhat restricted (they cannot be traded for example) because they also serve as a way for the government to keep inflation in check while the state is unstable (war brings uncertainty).

As a game mechanic in Heroes & Generals, technically the bond is the same as an item or weapon. Once you buy it, you have it. At this time War Bonds are kept in the database attached to your account, so you don't need to worry about losing them. 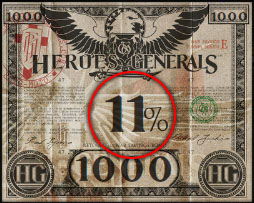 It is not free to borrow money (as players with a house mortgage will know) so the bond issuer (in this case Reto-Moto) will have to pay a price for the loan. The price is called the interest or the coupon (back in the old days the bond had actual paper coupons attached to them and the bondholder could go to a bank and exchange the coupon for money).

The coupon (or interest) is usually a percentage of the loan payed with fixed intervals (in our case, 1 payment each month). The interest is paid by the bond issuer until the bond expires.

For example, Danish State Bonds pay (as of time of writing) 1.64% interest and are considered low risk - Denmark's AAA credit rating indicates it is considered a very financially stable country.

In contrast, Spanish State Bonds at the time of writing, pay an interest rate of close to 6% - at first an attractive prospect to investors, but there is a considerable risk that the Spanish government may not be able to pay either the value of the bond, or the interest - this results in the bonds earning the nickname "junk bonds". These High-yield Bonds as they are technically known, sit at the riskier part of the investment spectrum, with only highly skilled, or lucky, investors being able to make enormous amounts of money picking out the few good ones.

This bond expires in 6 months

When the bond expires (or matures as they say in the finance world), the bond issuer will pay back the loan to the bond holder. In Heroes & Generals this means you will get your gold back in 6 months.

The length of time until the bond expires (matures) can be anything. In real life the maturity is most often between 1 year and 30 years. In a game like H&G it is not practical to have maturity for that long (and who knows where the game will be in 30 years ;-) ), so we've decided that the first batch will have maturity of 6 months. (And in a game where a well planned war can last months of real time play, 6 months actually works out quite realistically as an "in game" mechanic.)

In real world markets, bonds with short maturity dates (1 year) are often used more as 'money market instruments' than actual bonds. This means they are used to 'correct' pricing and 'quality'. In H&G you cannot currently trade your War Bonds to other players (even though it may be interesting to be able to do that some time).

Additionally, some real world bonds grant the issuer the right to 'call'. This means that the lender can at any time choose to repay his loan. In the interests of simplicity, H&G does not have this option, so you will keep your War Bonds until the expiration date. 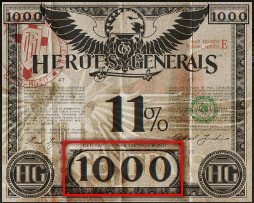 The value of the bond is called the Nominal Value or face value because it is the value actually written on the bond. This is the amount of money that the bond issuer will have to pay back to the bond holder when the bond expires. Our first series of War Bonds have a Nominal Value of 1000G. We might issue new bonds with different values in the future.

Sometimes the Nominal Value is set really high if the issuer only want heavy financial institutions to buy their bonds. Some old companies also practice this with their stock. Keeping few stock at a high price ensures that the buyers are somewhat serious.

The bond can be bought for 955G

When the bond is first offered to buyers it might have a different price than the Nominal Value; this price is called the issue price. In our H&G example image to the left, the player pays 955G for the warbond.

The issue price is sometimes set lower than the nominal value in order to attract buyers. When the bond is traded on a stock exchange the issue price is variable. It becomes a measure of the risk involved in the bond. Low price means high risk. You can think of it as the bond holder's chance of getting his money back at expiration.

Sometimes the issue price is higher than the nominal price. This might sound weird, but it reflects very secure investments and in this case the higher price reflects the compounded interest for the entire duration. The Danish state bond that expires in 2039 with the interest of 4,5% have an issue price of 142dkk for a bond with the nominal value of 100dkk. This again reflects that investors are very confident that the state of Denmark is able to repay it's debt. It is considered a 'safe haven' for investors to place their money while the rest of the global financial market is in turmoil.